Ao Shun (敖順) is the Dragon King of the North Sea, also known as the Black Dragon or 黑龍 in Chinese.

Associated with the elements of winter and water, Ao Shun is illustrated on this collectable rising magnificently from the sea towards the sky, following the direction of the North. The horizon separating the sea and sky stretches across and beneath him, with deep indentations on an ultra-high relief to give it an exceptional 3D effect. The highlight of this piece is a translucent black enamel that was specially chosen to be applied to the water, reflecting Ao Shun’s revered status as the Black Dragon who commands the element.

In the geography of ancient China, large water bodies were found in each of the four cardinal directions. The four seas thus became a metaphor for the boundaries of China, with the belief that each of the seas were governed by Dragon Kings - the most powerful creatures in the world.

As divine rulers of the waters and the Five Elements, the Dragon Kings of the Four Seas manifested in two forms - their human persona and dragon deity form. They were worshipped to bring peace and safety to all seas, lakes and water bodies, and believed to rule all weather on Earth. Since then, many have continued to invoke and seek favour of the Dragon Kings for a smooth and peaceful life.

Through the use of a new minting technique called “Bi-Metal Reverse”, this coin achieves a remarkable weight and 80 mm diameter size - making it double the size of a regular 2oz coin. By combining 2oz of silver as a base with a top layer of 11.5oz of copper, the result is a super ultra-high relief that brings out every detail to maximum effect, then finished with antiqued silver to conclude. 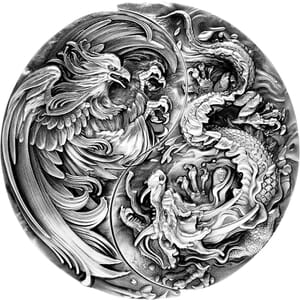 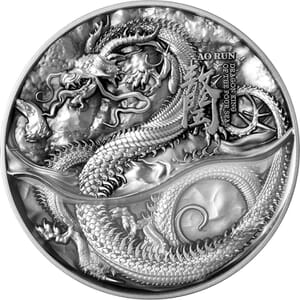 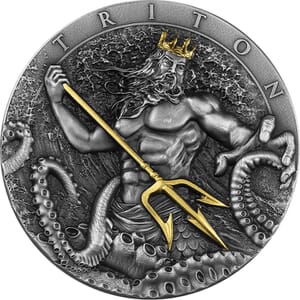 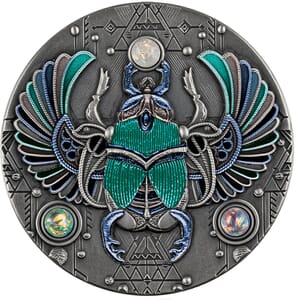